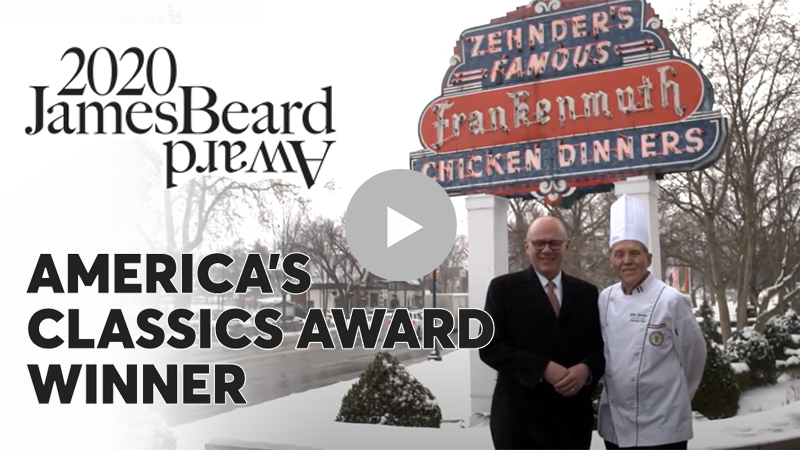 Over the course of the last week, the James Beard Foundation has revealed two honorees daily via the Foundation’s Instagram page in partnership with a selection of prominent food industry friends of the Foundation located in each of the honorees’ regions.

The America’s Classics Award is given to locally owned restaurants that have timeless appeal and are beloved regionally for quality food that reflects the character of its community. This year’s honorees join the ranks of over 100 restaurants across the country that have received the Award since the category was introduced in 1998. They will be celebrated at the annual James Beard Awards Gala on Monday, May 4, at the Lyric Opera of Chicago.

Zehnder’s of Frankenmuth, a chicken-dinner behemoth positioned between Detroit and Michigan’s summer lake destination, is decidedly on the beaten path. William Zehnder, Sr. and his wife Emilie bought a former hotel in 1928. Today the restaurant — part of a complex, run by third and fourth generation family members, that includes a hotel, waterpark, and golf course — can accommodate 1,500 guests and brings in close to a million people each year. Road-trippers come for family-style meals of crisp-skinned fried chicken, dressing, mashed potatoes, liver pâté, cranberry relish, cottage cheese, and more, all replenished until worn-out diners signal they’re ready for a scoop of sherbet with a paper American flag planted alongside the maraschino cherry. Then it’s time to pose for photos with a patient mascot in a rooster suit.

In Arkansas, ordering buffalo ribs will land you a plate of fried fish—seasoned, battered ribs cut from local big-boned buffalo fish. In Little Rock, the place to eat them is Lassis Inn. Founded by Joe and Molassis Watson in 1905, it started as a sandwich shop out of their home, with Joe later adding catfish and buffalo ribs to the menu. Lassis Inn (the name is a shorthand for Molassis) later became a meeting place for Civil Rights leaders like Daisy Bates during the ’50s and ’60s. Under current owners Elihue Washington Jr. and his wife Maria, it remains a community hub—a gathering spot where people come for buffalo ribs, cold beer, and warm conversation.

In 1906, friends Arthur Pappas and Louis Canotas left Greece in search of a sweeter life. They opened the Puritan Confectionary Company in Manchester in 1917, the first in a line of ice cream shops and restaurants throughout the city. Their children followed in their footsteps, opening the Puritan Backroom in 1974. Today this location also includes a bustling takeout business and a conference and event center. Customers still line up for Puritan ice cream, and crowd into booths for American comfort food and Greek classics. Above all, they come for chicken tenders (which the Backroom claims to have invented), along with a mudslide or two, another house specialty. This New Hampshire mainstay has become a required stop for candidates passing through on the campaign trail. In an era of division, it is a rare nonpartisan space where everyone feels welcome. Today the restaurant is run by third-generation owner Arthur Pappas, son Chris, and son-in-law Eric. Chris Pappas, who caught the political bug growing up at the restaurant, is currently a New Hampshire congressman.

In 1971, Mila Apostol opened Oriental Mart also known as “O’Mart” in Pike Place Market to give fellow Filipino immigrants the groceries and culture they missed from back home. Eventually, Mila and her eldest daughter Leila raided their store shelves to make adobo and sinigang for farmers delivering produce to the market. Word spread to Filipino flight crews and cruise ship workers, but also to Seattle at large. Today, Mila’s daughter Joy runs the retail side of their market stall, while Leila oversees a counter in the style of the Philippines’ turo restaurants, filling her glass hot case with the fried noodles known as pancit, juicy longanisa, and long-simmered adobo. There’s always sinigang; Leila adapts the classic tamarind-sour soup to its Northwest surroundings with salmon collars procured from neighboring fish vendors.

Among Denver’s thriving Mexican food culture, El Taco de Mexico is a lodestar whose appeal cuts across lines of race, class, and age. Maria Luisa Zanabria, a native of Mexico City, arrived in the city in 1985, first opening a trailer on Santa Fe Drive in Denver’s Art District. Her business grew into a small taqueria with a bright, bumblebee-yellow exterior. The serious, focused cooks (all women) keep pace with the all-day crowds, turning out tacos (carne asada, al pastor, and lengua are among the options), enchilada, gorditas, and weekend menudo. The restaurant’s crowning glory is the pork burrito, smothered in green chile humming with earthy spice. Made extra-heaping as a breakfast burrito stuffed with egg and chorizo, it brings bleary-eyed devotees back to life.

Armando “Mando” Vera and his family practice a near-lost art in South Texas: barbacoa de cabeza (barbecued cow’s head) buried underground in a brick-lined pit and smoked for up to 12 hours. The tradition stems from the region’s 19th century vaquero-cowboy culture; Vera’s father opened a restaurant serving the specialty in 1955. Barbacoa is for weekend feasts. Customers request meat by the pound or halfpound (cachete, or cheek meat, is a rich and popular cut) and then build their own tacos with tortillas, homemade garnishes, onion, and cilantro that come with each order. Brownsville is a four-hour drive from San Antonio, the closest major Texas city, but the chance to savor this disappearing border-town delicacy merits a pilgrimage.

The 2020 James Beard Awards will mark the 30th anniversary of America’s most coveted and comprehensive honors for chefs, restaurants, journalists, authors, and other leaders in the food and beverage industry. Throughout their three-decade history, the Beard Awards have both sparked and reflected trends in America’s food culture. To commemorate the past, honor the present, and look to the future, the Foundation is celebrating the nominees, winners, events, and milestones that have created the dynamic and ever enlightening food and restaurant community we have today.

Embodying the Foundation’s mantra, Good Food for Good™, the Beard Awards also support sustainability, gender equality, inclusion, equity, and access for all. As the preeminent benchmark for culinary excellence, the Awards will continue to support the James Beard Foundation’s mission to make America’s food culture more delicious, diverse, and sustainable for everyone: celebrating the past while championing the future.

The Restaurant and Chef Awards semifinalists will be announced on Wednesday, February 26, 2020.

Nominees for all award categories will be revealed on Wednesday, March 25, 2020. The celebrations will begin in New York City on Friday, April 24, 2020 at the James Beard Foundation Media Awards presented in association with HOUSTON FIRST©, an exclusive event honoring the nation’s top cookbook authors, culinary broadcast producers and hosts, and food journalists that will take place at Pier Sixty at Chelsea Piers.

The events then move to Chicago with the Leadership Awards Dinner taking place on Sunday, May 3, 2020, where honorees will be recognized for their work in creating a more healthful, sustainable, and just food world. The James Beard Awards Gala will take place on Monday, May 4, 2020, at the Lyric Opera of Chicago. During the event, which is open to the public, awards for the Restaurant and Chef and Restaurant Design categories will be handed out, along with special achievement awards Lifetime Achievement, Design Icon, and America’s Classics. A gala reception will immediately follow, featuring top chefs and beverage professionals from across the country.

Established in 1990, the James Beard Awards recognize culinary professionals for excellence and achievement in their fields and further the Foundation’s mission to celebrate, nurture, and honor chefs and other leaders making America’s food culture more delicious, diverse, and sustainable for everyone. The first James Beard Awards were given in 1991. The James Beard Awards are governed by the volunteer Awards Committee. Each Awards program (Restaurants and Chefs, Books, Journalism, Design, Broadcast Media, and Leadership) has its own subcommittee made up of industry professionals who volunteer their time to oversee the policies, procedures, and selection of judges for their respective Awards programs. All James Beard Award winners receive a certificate and a medallion engraved with the James Beard Foundation Awards insignia.

About the James Beard Foundation

The James Beard Foundation’s mission is to promote Good Food for Good™. For more than 30 years, the 501(c)(3) nonprofit organization has highlighted the centrality of food culture in our daily lives. Through the James Beard Awards, unique dining experiences at the James Beard House and around the country, scholarships, hands-on learning, and a variety of industry programs that educate and empower leaders in our community, the Foundation has built a platform for chefs and asserted the power of gastronomy to drive behavior, culture, and policy change around food. To that end, the Foundation has also created signature impact-oriented initiatives that include our Women’s Leadership Programs, aimed at addressing the gender imbalance in the culinary industry; advocacy training through our Chefs Boot Camp for Policy and Change; and the James Beard Foundation Leadership Awards, which shine a spotlight on successful change makers. The organization is committed to giving chefs and their colleagues a voice and the tools they need to make the world more sustainable, equitable, and delicious for everyone. For more information, please visit jamesbeard.org and follow @beardfoundation on Instagram, Twitter, and Facebook.