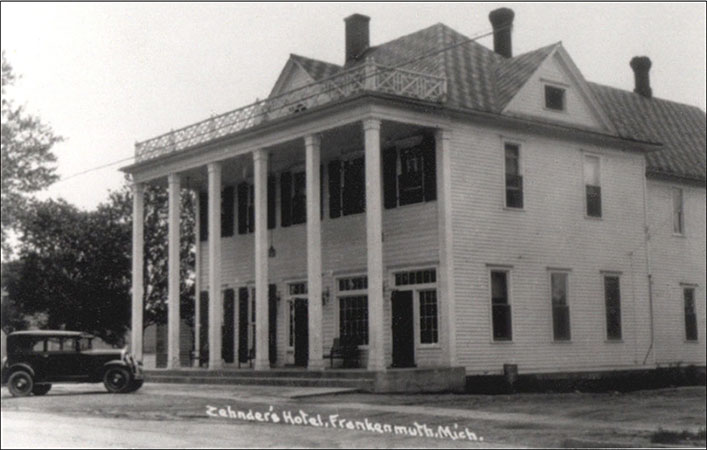 I don’t know what my grandparents were thinking. The country was in the throes of the Great Depression and Prohibition had been passed 10 years earlier. The state of the economy was miserable. The logical conclusion would not be to get into business, much less the restaurant business; a business they really knew nothing about. But they did. They sold their farm; the money was needed for the down payment of a closed restaurant, The Exchange Hotel, just across from an apparently successful restaurant Fischer’s Hotel.

The family moved in and the business also became their home; the year was 1929. The German culture of the Frankenmuth community had a rich brewing history. Many homes and businesses, regardless of Prohibition, made beer and sold it to the “right customers”; my grandparents William and Emilie Zehnder were no exception.

Apparently acting on a tip, Federal Agent Burns O’Leary, entered Zehnder’s Restaurant on July 26, 1930, ordered, and was served, a beer. Just four days later on July 30th, 1930, ten federal agents from Detroit and several State Police raided both Zehnder’s and Fischer’s. William and Emilie Zehnder and Herman Fischer all plead guilty to charges of serving alcohol in anticipation of a small fine. Incredibly, the judge fined Herman Fischer $10,000 and William Zehnder $5,000. According to the November 12, 1930 issue of the Bay City Times, they were the largest fines levied in the U.S. during Prohibition.

Thursday July 26th, 2018 marks the 88th anniversary of Zehnder’s serving one of the most expensive beers in history. While the fine nearly brought an early end to our company, which had opened its doors just 14 months earlier; William, Emilie and their family persevered, as has each successive generation.

If your summer travels bring you to Frankenmuth, stop in and enjoy one of the craft beers that our Tap Room features every day. Many are Pure Michigan.